Taking a Stand in the Debate Over Illegal Immigration 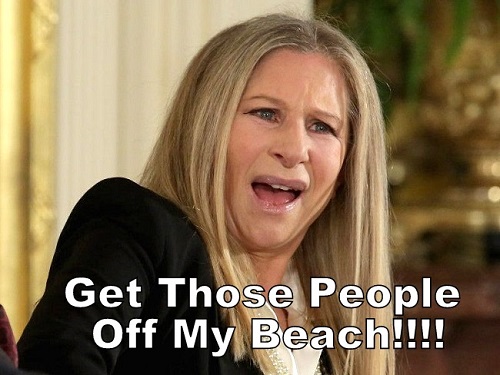 According to the Sacramento Bee, the City Council of the celebrity enclave  of Malibu California voted 3-2 earlier this month to approve a resolution prohibiting use of city resources to enforce federal civil immigration law, thus joined the ranks of sanctuary cities.


"When I reached out to some of the people at the schools and other people in the community, they told me people are scared. To the influx of immigrants coming into Malibu who may be undocumented, I wanted to send a clear message that we are here for you."

Malibu is home to wealth movie moguls and rock stars from Bob Dylan to Steven Spielberg and Barbara Streisand, who interestingly just so happened recently got their panties in a wad over access to the beach in front of their homes by the unwashed commoners.

So you can't imagine my surprise when Diogenes recently received an email from Barbara Streisand (obviously by mistake) and addressed to someone named Arthur Sulzberger, who must run a website or something that famous people write Op-eds and pretend to know a lot about everything. After I read the unpublished post embedded in the email, I couldn't resist sharing it with my readers.

Here is the article you asked I write about at the Glorious One's last invite to dinner at the White House. I'm sorry it isn't quite up to Babs' usual intellectual excellence, but I am so distracted these days by all the pretty things Babs surrounds herself with. I know a guy who lives as you do would understand about this kind of thing also. I'm sending my pool boy to NY with the $247.00 submission fee (such a pittance for a posting fee these days) but I don't mind doing my part to redistribute the wealth as our former great leader Barack once said we should.

Power to the Correct People,

Why I'm Against Immigration Reform
By Barbara Streisand 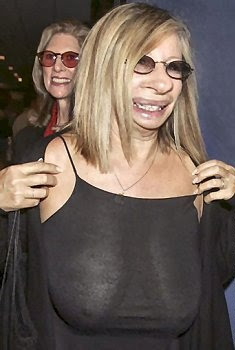 I have this employee in my housekeeping department we'll call "J". We'll call her that because most Hispanic people have a name starting with the letter J and I strictly forbid my employees from learning the names of each other because name-knowledge promotes needless chit-chat. It would be hypocritical of me not to abide by the same instructions I demand my staff follow, therefore I have no clue as to J's real name.

While reviewing security footage one night with my husband.....what's his name.... I noticed that everyone really seemed to like J. They smiled at her, waved at her, and often made physical contact,  which I'm told expresses admiration, support, or just general kindness. The traditions of the everyday little people are simply fascinating!

Coincidentally, J passed me in the hallway the other day. While she was careful to observe the two-foot rule, she did not abide by Chapter 25, Paragraph 15 of the, "Streisand Household Handbook for Successful Dealings with Ms. Streisand," which states, "On rare occasions in which you are lucky enough to come within earshot of Ms. Streisand, you are to refrain from making a single sound with any part of your body, orifice or otherwise, or article of clothing. Violation of this rule could result in termination, and replacement." She dare muttered "Excuse me!"

People seem to enjoy enjoy the company of J even though she has no musical ability. How in the world does she pull that off? Babs no comprendo.

I asked husband about it and he said that a lot of people enjoy engaging in conversation for recreational purposes. Apparently speaking with others is cathartic for some. But she doesn't speak with people because she’s asking for political favors or election donations. She's not admonishing underlings for inappropriate eye-contact, because 13% of the kitchen floor tiles contain unacceptable levels of grime, or because she found a Cheerio underneath the refrigerator and is demanding to know who's responsible. So apparently J is the Barbra Streisand of talking to people. Like I am great at singing, she is great at conversing. I'm told those who excel at conversation often have many friends.

The reason I became an Academy Award winning superstar singer/actor/director triple threat is so I could talk to other Academy Award winning living legends. If I wanted to talk to maids, I would have taken up house cleaning.  Conversations with the help are a waste of my time and a waste of their time. And I'm paying them while they're at my residence.  Plus, it's always awkward because I can't understand a word they say.  Besides, people don't get paid to talk to Barbra Streisand; people pay to talk to Barbra Streisand.

Well, the truth is, I don't. But Babs needs a supply of readily available inexpensive fence jumpers for replacements and full staffing. That's why I'm against Immigration reform!


Thank You MJA for the Linkage