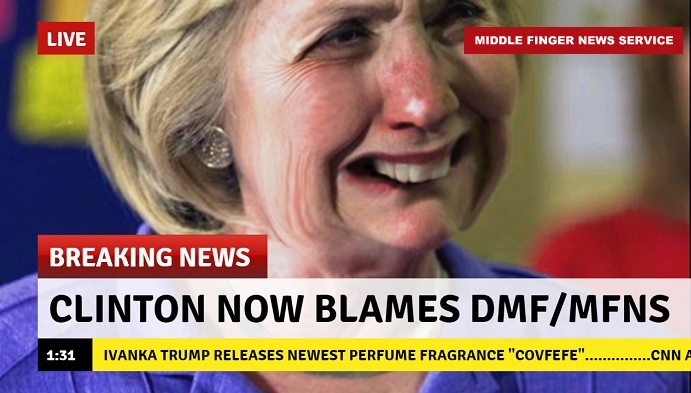 Speaking before a gathering of Adult Diaper Manufactures Thursday, Mrs. Clinton fired both her whining barrels at the respected news organization as she became visibly upset:


"I took great care to warn my replacement as Secretary of State, Senator John Kerry, about this vicious bunch at Middle Finger News, who he later labeled "Unamerican, Uncosmopolitan, Despicable Hooligans" after his own experiences with them.  I directly blame them for playing a large part in my ......*BURP*.... election loss for the false and totally unfair  portrayal of me to the American electorate. Especially that elusive witch who goes by the name Diogenes and her cohort.... that smartass Earl of Taint, both for their vicious satire and distorted imagery of me as a Drunken, Bumbling, Bloated, Radical Grandmother and Crime Family Boss with one foot in the grave. It's a G** D*** good thing for the whole bunch of them that I didn't get elected!!!"...... Those Rat Bastards are gonna pay!!........You HEAR ME!!!!!"

Mrs. Clinton then began repeatedly banging her head on the podium and broke down in tears and a raging coughing fit, and had to be helped off and attended to backstage.

When CNN contacted the MFNS HQ about the statement by Clinton, an unnamed MFNS spokesman refused comment, but the newsroom was heard to break out in uproarious laughter. When our reporter informed the spokesman he had never heard of Middle Finger News Service before, the spokesman laughed and responded "Don't get out much do ya Skippy? Shit, Go ask Anderson Cooper, we made him cry too!"
© Posted By Diogenes Sarcastica™ on 6/01/2017 06:30:00 PM
Labels: Ma Clinton, Middle Finger News service
Newer Post Older Post Home