Since we're living in a world gone mad, I suppose nothing should surprise us. No matter how weird things get, we should probably just shrug our shoulders, say "huh. that happened," and move along. I mean, the last election should have prepared us for how strange things were going to get, right? Nope.

This morning, we woke to find ourselves in a strange new reality where the President of the United States rips a TV host for her bleeding face lift, and she fires back with a "small hands" meme. We're trapped in the Junior high lunch room of national politics, a place where children squawk at each other while the world burns around them. 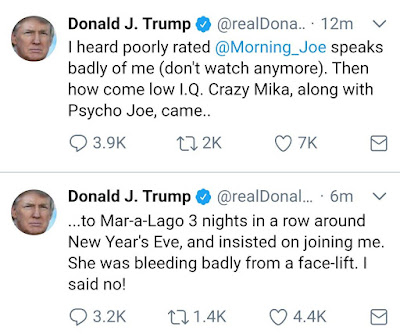 Sure, Mika's a blithering dolt. No one's arguing otherwise. She's wrong about virtually everything, has no business being the host of an alleged "news" show, and the flood of faux outrage she pours over every single minute issue grew exhausting years ago. But doesn't the leader of the free world have better things to do?

I get that the media is, rightly, despised, and that they provide a hilarious punching bag, but at some point you have to step away from the keyboard and think about what you're saying.

Punchline that she is, Mika fired back in predictable fashion... 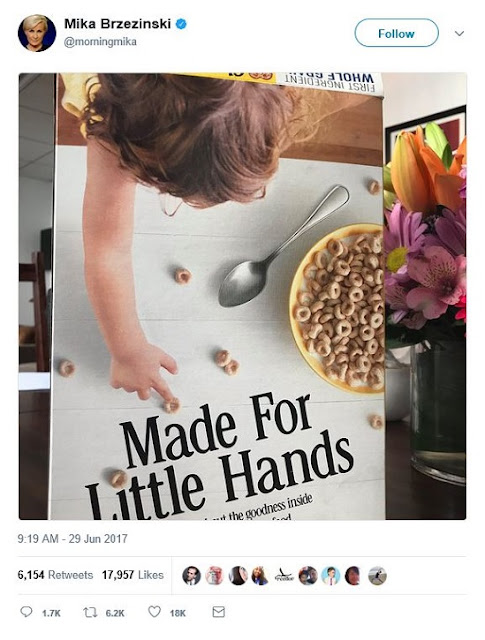 Yep. A "small hands" joke - which, as you know, is really a reference to a small ...something else. In other words, Mika's decided to go the "I know you are but what am I" route. It's just as childish and probably twice as dumb.

This whole episode illustrates my one and only complaint with Donald Trump: Not using social media to his advantage to forward his policies and agenda.  Everyday reporters in the traditional media expose themselves as biased and fraudulent. You don't arm your enemy, and you don't get in the way of your enemy while they are in the process of committing suicide.
© Posted By Diogenes Sarcastica™ on 6/29/2017 12:44:00 PM