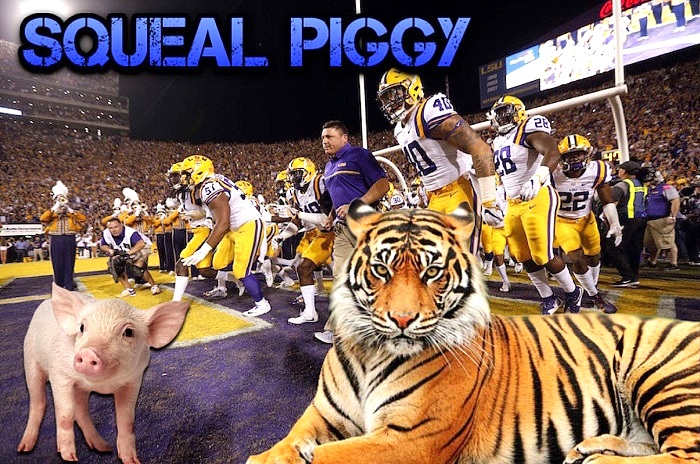 After a trip to Tuscaloosa and giving the Crimson Tide all they could handle in a valiant losing effort last Saturday, the Tigers return to Death Valley this week to host the Arkansas Razorbacks in an early Saturday game.  Papa Hog and his Hapless Pigs haven't been much of a danger to anyones season this year, and shouldn't be much of a problem for the Tiger running backs, who were able to run for double Alabama's game average last week. That said, this is an Arkansas - LSU game with a long history that tells us the unthinkable is always a possible.
I say Tigers by 17  ✔

ELSEWHERE in the SEC

Florida v. South Carolina - 11AM CT - CBS
The Squirrel McElwain is gone, but the fact remains the Gators still suck.
I say Gamecocks by 14 ✔

Georgia v. Auburn - 2:30PM CT - CBS
Okay, Jarrett Stidham is for real, at least against lesser defenses. They've played against 2 good ones and loss to both. I'm still not convinced the Gus Bus is on the same level as Alabama and Georgia.  But this should be a good game.
I say Dawgs by 10  ✖

Alabama v. Mississippi St. - 6PM CT - ESPN
If MS studied the film carefully of the LSU game at Alabama last week, they could learn a lot about Alabama's defense (even the LSU radio play-by-play guys noticed something revealing) and they could make this a game. If not, no amount of cowbell is gonna save them from their wrath........
I say Tide by 17 ✔

Upset of the week:
TCU goes to Norman and beats the Okla. Sooners in their own house.  ✖