Dershowitz: We’re Giving Up Our Civil Liberties to Get Trump 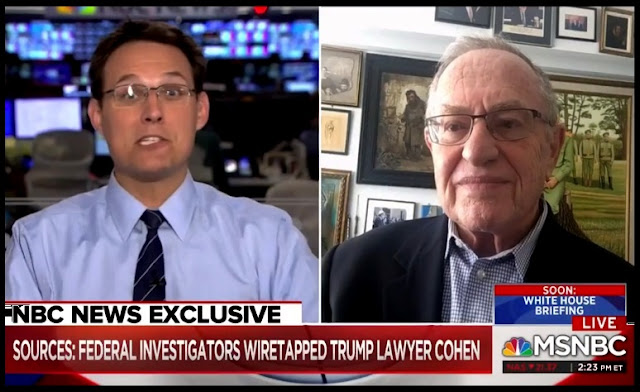 NKT - Harvard Law School professor Alan Dershowitz said that Americans are giving up their civil liberties so that Special Counsel Robert Mueller can bring charges against President Trump during an MSNBC interview today. Steve Kornacki asked Dershowitz to react to the news that federal prosecutors had tapped the phone of Trump’s personal attorney Michael Cohen. “I think we are moving closer and closer to the surveillance state, where phone calls are tapped, where emails are secured, without a real basis,” Dershowitz said. “We live in such a partisan atmosphere of ‘get Trump at any cost’ that we’re for getting Trump.”

It's very likely that Trump talked to Cohen without his legal "team" even knowing about it, and only the FBI knows what was discussed. Investigators along with the court will decide if the conversation was privileged.

* After the left-wing websites jizzed all over themselves at the thought of potential proof of corruption, NBC News issued a correction:


"Michael Cohen's phones were being monitored by a pen register, not a wiretap, senior U.S. officials say. Pen registers capture "to and from" calling and texting information, but not content."