In the event it wasn’t already painfully obvious to all well before DJT nominated Amy Coney Bennett to the Supreme Court, it became crystal clear during Judge Barrett’s confirmation hearings that Sen. Mazie Hirono (D-HI) is not exactly the sharpest tool in the shed.
And yesterday as the Senate was voting to confirm Judge Amy to the court, a visually upset Hirono is seen on camera walking up and down the aisle steps, her arms crossed in front of her in a show of agitation and frustration, worthy of even the most dramatic petulant foot stomping teenage girl.  Hirono then proceeded to walk to the Senate dais in order to cast her “no” vote. But instead of simply saying “no”, with a clenched fist of righteousness Hirono can be heard  in the video saying poutingly “I would like to say hell no” before angrily stomping off the floor.
MRC-TV posted this zoomed-in clip of Hirono’s protest vote, which confirmed she was also wearing the same anti-nazi statement in the form of a Ruth Bader Ginsburg mask she wore throughout prior weeks’ proceedings on ACB’s nomination:
This is not the first time Hirono has stormed off in a huff from a Senate proceeding. During an August Senate Judiciary subcommittee hearing on the Antifa/BLM-led violence taking place in Democrat-run cities across America, Hirono repeatedly refused subcommittee chair Ted Cruz’s request to directly and unequivocally condemn the radical leftist group Antifa. Instead, Hirono chose to pack up her things and walk out of the hearing before it was over.
Hirono, like her fearless leader Chuck Schumer, needs to fill out one of those Butt Hurt Forms my folksy Senator John Kennedy (R-LA) half-jokingly said last week.  She should also, as Kennedy advised Schumer, find it within herself to grow up and move on and stop embarrassing herself on a national stage. 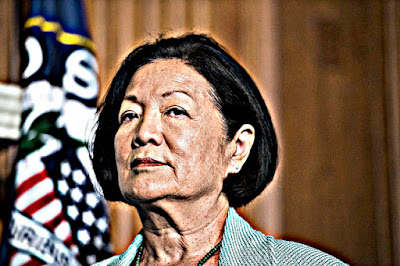