Does Amy Coney Barrett hate medicine? I'm not asking whether she dislikes swallowing pills and anything that smacks of what children refer to as "yucky medicine taste." I am thinking of something more visceral: seething rage at the thought that somewhere a child might be having his appendix removed instead of dying after it ruptures, or impassioned ranting against the iniquity of a widowed grandmother getting insulin for her diabetes.
I am asking because this kind of cartoon villainy is roughly the impression being projected as Judge Amy's character that one might get after listening to hours of loose babble from self righteous showboating Democrats during the early Senate hearings on her nomination to the Supreme Court.
In Barrett's America, according to the psycho Hawaiian pineapple, Senator Mazie Hirono, who would have you believe bands of warlords will roam the streets shaking down St. Jude Mathathons and burning the results of screenings for testicular cancer. The funny thing about the absurd sounding hypotheticals raised by Hirono about the consequences of Barrett's nomination for her own health is that at no point did she acknowledge that she has spent most of her adult life eligible for the top tier, gold plated state & federal government health-care plans you and I payed for.
Apart from these absurd insinuations about judge Amy coming for your physical therapy pillow, the hearing was memorable largely for its technological mishaps. I have never felt more comfortable with the 17th amendment's insistence that the men and women of the Senate are the people's chosen representatives than I did seeing them struggle with Zoom like the rest of us.
Headlines like "Supreme Court nominee Amy Coney Barrett has seven kids. And don't you dare forget it," which is unusually nasty even by the standards of Jeff Bezos' newspaper, tell the story of Monday far more succinctly than I could. Because I do not make a habit of attempting psycho-sexual readings of the behavior of those with whom I disagree, I will not comment on the bizarre media fixation on a certain science fiction novel that forms the basis for comments like these:

It’s a very weird thing to watch these old creeps congratulate a handmaid on her clown car vagina.

Similar examples could be multiplied infinitely. But this bickering is pointless.
The Barrett Death Star is fully operational. The vacancy is there. The nomination has been made. Republicans have the votes, and on Oct. 22, ACB will be confirmed as the 115th Justice of the Supreme Court.
I for one will rejoice. 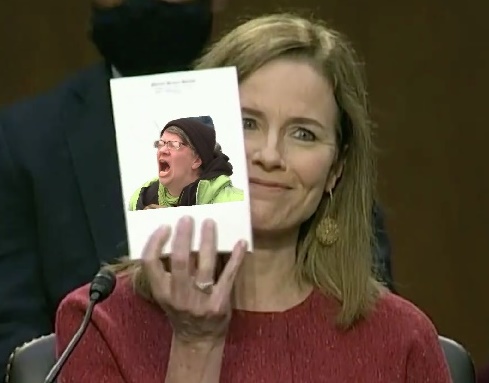