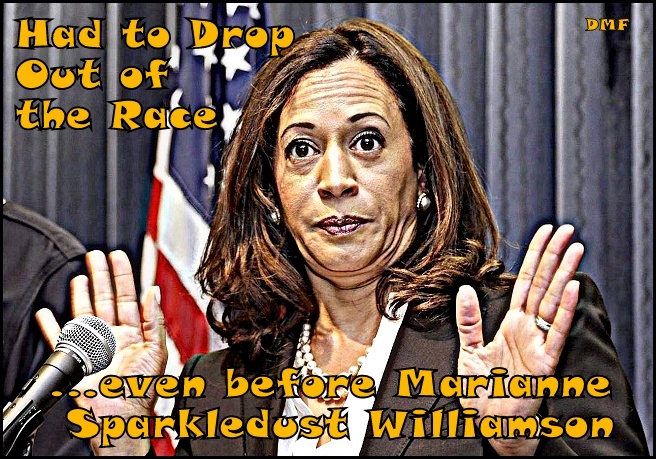 Continued exposure and very public incompetence's has not raised Kamala Harris in the public’s esteem. After passing herself off as a down with the struggle, former Hip-Hop diggin', reefer tokin' negro princess from Oakland trolling for the black vote as an embarrassingly bad presidential candidate, now is found lacking even her party's confidence as vice president.
Trafalgar polled respondents within the last week, and found 58% not confident in her at all.  Even 43% of Democrats are not confident that Harris is ready for the big time.
Her pick as a running mate was a head scratcher to most who knew she ruthlessly climbed the political ladder partly as a result of regularly visiting the pants of the powerful mayor of San Francisco while district attorney, and as fawning media, daytime female talk-fest, and late night former comedians obsess about her looks, Chanel handbags, and Manolo Blahnik shoes.
In truth she's what you get if you combine the naked ambition of a Hillary Clinton with Sanford and Son's Aunt Esther. An Extremely Unlikable Person.
I have always suspected the leaders of the Party who picked her, whoever they are, have been planning to ease 46* out of office on the ground of failing health (or untimely accident *wink wink*) and replace him with Harris. Even if 46* manages to survive his term, it won’t be easy for the Democrats to turn to someone other than Kamala–a woman of color–in 2024. Her continuing unpopularity, which public exposure seems to aggravate rather than mitigate, poses a real problem for the Dems.
Pass the Popcorn.
[Powerline]
[DGY]
© Posted By Diogenes Sarcastica™ on 7/19/2021 08:00:00 PM