With Nan's face diaper requirement in the house chamber rescinded, and the US Capital once again ringed by fences topped with razor wire, the stage is set for the nation's roundly disapproved of and incompetent leader to address congress and the nation in the annual manure spread know to us all as the State Of The Union message.

We can once again expect more lying then a teenage boy with his pants around his ankles sitting in a squad car trying to explain to a Deputy why the Sheriff's daughter is in the back seat of his car naked from the waist up.

And like all of 46* speeches, a mind-numbing exercise in self-praise and lofty unworkable leftist ideals, an economic picture embellished with a rosy glow of unreal accomplishments.

But we're sure to be entertained as in past years, despite the droning speech, watching Nan fidget around, going from grinning like a mental patient for no apparent reason, to getting that pained look on her face like she's passing a kidney stone and wishing she could get up and have a double shot of gin.

But SOTU Bullshit Bingo enthusiast are sure to be pleased by this years Official STATE OF THE UNION DRINKING GAME CARD, compliments of our good friend Curmudgeon @PoliticalClownP. 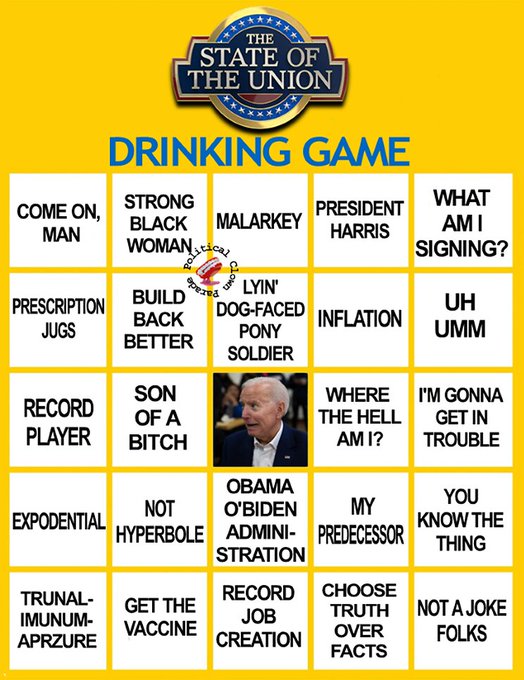