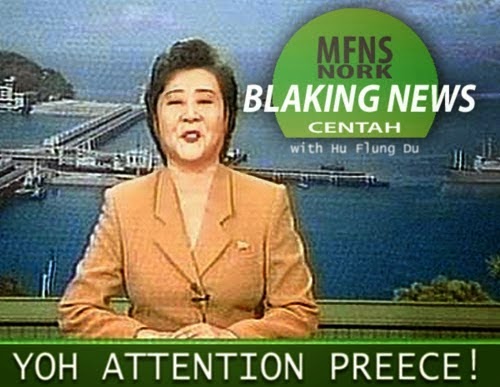 The controversy centered around the young Kim's schoolmates when it was reveled she was not only allowed a coming out party, but among the lavish presents, her own portable ICBM with matching mobile launcher said to be engrave with "From your Loving Supreme Leader,Daddy". (Look Down)

A jealous fever turned to near riotous conditions ensued after the news overcame the all female student body of the Shoet-Yuu Finishing School and Education Camp over the blatant privilege of their classmate, Kim. The latest word is the situation is said to have been handled with delicate negotiation by the school's armed Internal Security and school's perimeter armored guard.

At age 3, and without outside distractions of family for the next 12 years, select young Korean girls are given an elite, sterile, world class Korean education.  Then at age 15 returned to society as an example of the Superiority of North Korean culture and to be married and stand in full support of their committee chosen brave husband warrior & defender of Democratic Peoples Republic of Korea.

In a side note: US Teacher's Union leader, Randy Weingarten, has expressed interest in visiting the Shoet-Yuu Education Camp facility to take notes on the Korean model for improving the American education system.