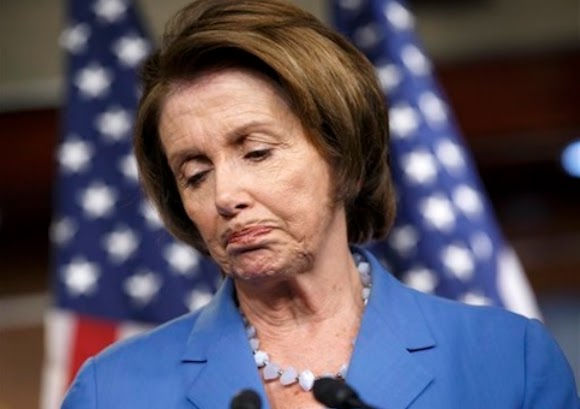 MFNS-WASHINGTON DC - Late Friday night near panic struck the Chamber of the House of Representatives during a debate before those present of a bill sponsored by democrats for $350 Billon in federal funding for the construction of "Transgender Only Driving Lines" within California's Federal Highway system. The bill was Sponsored by House Minority Leader Nancy Pelosi (D-Cal.)

The debate was interrupted when House Speaker Paul Ryan notice Pelosi, at the dais at the time, head began to violently quiver from side to side. Middle Finger News Congressional Correspondent, Ima Gonagetu spoke to Speaker Ryan after the incident:


"I knew something was wrong when Minority Leader Pelosi began slurring her words and her face began to contort and could hear a metallic popping sounds...... and then heard the House Clerk scream and saw blood gushing from her forearm as she passed out and fell face first onto her desk....... I yelled THERE SHE BLOWS and ran for the door....."

What many who worked closely with Pelosi over the years feared would someday happen, happened. The permanent metal staples from her numerous massive face-lifts had begun to come loose. There was shrapnel in the air.

Along with the House Clerk, others wounded included the august Rep. John Lewis (D-Ga.) who survived a flying staple injury on the cheek.


"I'm Okay. I feel honored to have shed blood in this hallowed hall in an honorable cause for our Transgendered brothers and sisters....or huh... ......as honored as when I got my head bashed in with a brick doing up some trouble during the Civil Rights movement."

The few in congress who were there ignoring Pelosi's speech ducked under their desk for cover while others ran for the door. Many of the members later found metal staples lodge in their suit coats.

One such Congressman was Rep. Bullet-Head Elijah Cummings (D-Md.) who told us of his harrowing experience:


"There was fear in the air when everyone realized what was going on. I hadn't been that scared since last time I walked through my district in Baltimore! It was scary I tell you!"

Minority Leader Pelosi was restrained and removed from the House floor, later to be spotted exiting a black SUV at Walter Reed Army Hospital with a large Walmart bag over her head.
DEVELOPING...
© Posted By Diogenes Sarcastica™ on 11/17/2022 04:00:00 AM
Labels: San Fran Nan, Throwback Thursday