Just When You Thought They Couldn't Get Any Crazier....Along Comes Frederica 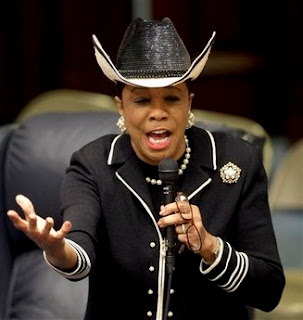 Wilson’s first goal will be to overturn a rule that blocks her from wearing a hat on the House floor. The freshman Democrat is going to press incoming House Speaker John Boehner to overturn the rule, which dates back to the 1800s, or at least to make an exception for her.   It’s unclear whether Boehner, who  will likely have plenty of priorities ahead of a rule-change request from a member of the opposition party, could do anything shy of a full floor vote to overturn the House’s hat ban. Wilson doesn’t own just a hat or two. By her count, the former Florida state House member owns at least 300 different hats, including custom-made sequined cowboy hats in virtually every color of the rainbow. Her hat collection is so massive, it takes up an entire room of her house, according to the Miami New Times. “I’ve been wearing them almost 30 years. It’s like a fetish.”
Its nice to see that Wilson has her priorities straight and that her first order of business will be taking care of her fetish. Wilson will undoubtedly be warmly welcomed to the CBC by fellow lunatics   Sanford Bishop, Keith Ellison, Chaka Fattah, Alcee Hastings, Eddie Bernice Johnson, Hank Johnson, Barbara Lee, Sheila Jackson Lee and Maxine Waters.

She ought to fit right in.