There is Still Unfinished Business 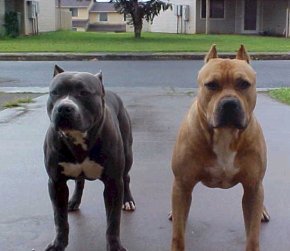 "I would love to get Michael Vick in the future and  think it would be a big step for me in the rehabilitation process", a Virginia Beach pit bull told a local newspaper.  Several dogs have expressed interest in owning Philadelphia Eagles quarterback Michael Vick.

Vick, who spent 18 months in federal prison for running a dog-fighting ring, recently expressed a desire to have a dog again. It’s a reunion that many dogs welcome.

“He served his time, has expressed regret and that’s very important,” said a muscular pit bull, pacing outside Vick’s Philadelphia residence. “But as far as the dog community goes? There is still unfinished business. So, sure, if he’d like to get back together, we are all for it. Name the time and place. We’ll be there waiting.

”A PETA spokesman, says the organization is staunchly opposed to Vick being around dogs again. “We support animals at every turn,” she said. “But we are also not anti-human. And we’re pretty sure any dog would go for the throat if Michael Vick were to get near it. We’re just trying to help him out here."

"I even know of teacup poodles who said they’d take him out.”

Those close to Vick are advising him to reconsider.