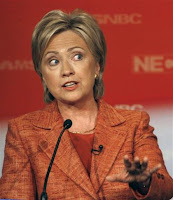 (Washington D.C.) The massive fallout from the last weeks WikiLeaks disclosures has prompted the State Department to take drastic measures to insure the safety of communications and cables between it's embassies and Washington. Among the steps to be taken  is  all U.S. diplomats are ordered to “cease and desist telling the truth until further notice."

Secretary of State Hillary Clinton has told reporters off the record they are working to try to make sure that leaks like these don't happen again, but until we they have got the leaks plugged, it’s incumbent on all our diplomats to put on their lying caps.

Clinton noted that since many US diplomats are major political donors to the Democrat party with long careers in the business world and that lying shouldn't be a difficult  for them at all. But for those career diplomats who came up through the Foreign Service, the State Department will be holding a series of “truth avoidance seminars,” led by executives of Goldman Sachs.

Additionally, Clinton said, the State Department would install on all diplomats’ computers new software called CandorShield, which automatically translates truthful language into a less embarrassing truth-free version. For example, the software would translate the phrase “two-faced weasels” into “trusted Pakistani allies” and would delete all references to French President Nicolas Sarkozy as “Monsieur Shorty Pants.”