As I wrote in an previous post Warming Up the Clinton Smear Machine, I believed Hillary Clinton will oppose Obama in the primaries for the 2012 nomination. The discontent in the electorate, Obamas inability to understand elementary economics and all around incompetency in office, spells blood in the water.  All the while, Secretary Clinton has remained for the most part out of view, avoiding controversy while meeting with former Clinton allies’ overseas and gaining trust and foreign policy experience. I expect her to resign as Secretary of State soon and prepare for a run.  The Earl of Ketchup (John Kerry) awaits in the wings to be appointed Secretary of State. 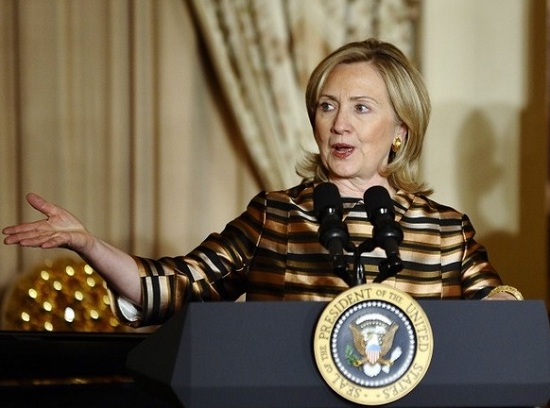 Maybe Barack Obama was wrong; you can put lipstick on a pig, but only if you believe you can continue to rely on the stupidity and short memories of the American Left.

Dissecting the 2008 primaries as best I can remember, it seems that Obama was originally the Ultra-Liberals attempt to get their views to the fore, because so far as they were concerned, Hillary Clinton was simply George W. Bush with a pantsuit on.  No one expected Obama to win so much as to be the standard bearer of the demented Left. His 'job' was to put their issues on the table, and to warn 'centrist' dems (a contradiction in terms) that the Dingbat Wing of the party should not be taken for granted.  Subsequent events, I think  have proven me correct in this assumption, bearing the last two years in mind,  does it look like Barack Obama was ever prepared to be President of the United States, or that he ever expected to win?


What has resulted from a policy perspective, both foreign and domestic, seems to indicate that no, he was not expecting to win, and when he actually did, he had no plan. None of that vision stuff. What Barack Obama actually did was to let Congress do his heavy lifting while he played golf and bought time to learn what being in charge actually means, a lesson he still seem not to have mastered.
The way I see it, Clinton lost an election she had every
opportunity to win primarily for three major reasons:
(1) - She ran her campaign as if she had already won, as if the Office of President was her birthright.  She seemed to be taking the Victory Lap before the race even started. She did everything but measure the Oval Office windows for new curtains (on the off-chance the old ones might still have Bill's you-know-what all over them), and plan to return the silverware that came up missing  when the Bushes moved (back) in.  Politically, Hillary would have been Bush-like, she would have continued the War, she would have kept the Patriot Act and she would not have advanced the same radical Health Care stupidity that Obama did (at least not in her first term). If you were a Whackjob Lefty in 2008, Hillary Clinton was George W. Bush's third term.
If you were a democratic party voter in the fall of 2008, and your choice was between The Crusty Black Pantsuit who talked a good game, but lied to your face, and could be reasonably expected to simply continue Bush's policies with only minor  cosmetic changes, or the Slick Hipster 'Outsider' who had inspired you with lofty rhetoric and a thin resume, but who restored your deluded vision of the heady days of JFK, RFK and MLK, only with a Program of Reparations attached, who would you chose?


(2) - Hillary Clinton carried far too much baggage.  About 200 pounds of it in the form of a guy named Bill.
(3) - In the "Great Pecking Order of Worthiest Victim Groups" that is democratic (small 'd' intentional) politics, Hillary The Heir Apparent was stunned to learn that (half-) Black Man still trumped Woman Done Wrong By Cheating and Abusive Husband.  As a result, Clinton took the job of Secretary of State because it was the next best thing; it gave her a serious job (junior Senator from a state you don't really live in is like being an unpaid intern, and besides, Charles Schumer is an obnoxious asshat), and it might even prove a springboard to future success.  And judging from the foreign policy mistakes of this Administration (ones that Hillary will be glad to tell you in the coming primary season were not her doing; she was simply following orders from above...yeah, like that worked at Nuremberg, too) that's not exactly something I would want on my resume.
She will pull out her old 'Centrist Democrat' disguise, something that barely exists anymore thanks to the GOP-Tea Party romp in the 2010 Mid-Terms, and run to Obama's right as a New-Old-Centrist-Blue-Dog Democrat (four lies for the price of one) while out-hawking the GOP Hawks, and do her damndest to be as indistinguishable as the most centrist Republican come 2012.


As for illegal immigration and border security, she’s been silent on both, because if you plan to run for President on the Democratic Party ticket you can't afford to offend all the illegal voters in California, your Mother Lode of illegal-alien-and-welfare-mother-supplied Electoral Votes --54 of them. That's 20% of the total required to be elected, you know. Let's see if the American electorate can still be that stupid two Presidential elections in a row, and fall for someone who's so obviously a poser, or whether the 'Throw The Bums Out' fervor of the Tea Party and the Great Middle continues.