Read carefully the graphic below: 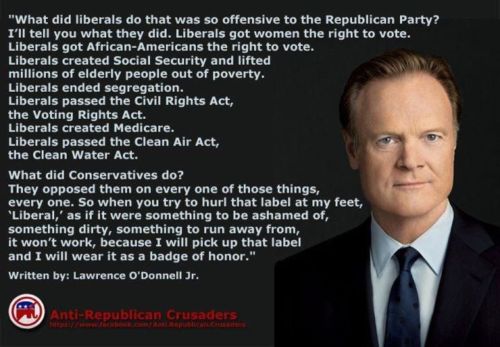 To compare the actual definitions of "Liberal" versus "Conservative" in the present day context and how they are used in the media and political discourse in 2011, you will find that they are grossly misused.

Most of what Mr. O'Donnell, who calls himself an "Anti-Republican Crusader", mentions as Liberal accomplishments are indeed true. What he fails to state is that the parties, Republican and Democrat, are not the same parties of the past. He hides the fact the accomplishments above were mostly opposed by his party, the Democrats. His hate for anything Republican is blinding and he is mis-informing the people he speaks to on the News Network (I use that term lightly) MSNBC nightly.

Anyone can see that the Republican Party of Lincoln is not the party of Ronald Reagan, no more than the modern Democrat Party is the party of Jefferson Davis. Branding modern Republican conservatism as mean spirited and uncaring is pure hyperbole. The Modern Conservative movement, raised to it pentacle by Ronald Reagan exist today to conserve the Republic and protect the individual freedoms. A Republican Conservative of 2011 is not the same as the conservative of the Democrat party of past. Mr. O'Donnell has twisted the truth and denies his party's shameful history. For most of this countries history, a different brand of conservatism manifested itself in a vehemently racist Democrat party, and remained there till the late 1960‘s.

Let's look at some facts, shall we:


"History shows from the formation of the Democratic Party in 1792 to the Civil Rights movement of 1960's, Congressional records show the Democrat Party passed no specific laws to help Blacks. History also reveals that the Republican Party was formed in 1854 to abolish slavery and challenge other racist legislative acts initiated by the Democratic Party."


"Congressional records show it was Democrats that strongly opposed the passage of the 13th, 14th and 15th Amendments. These three Amendments were introduced by Republicans to abolish slavery, give citizenship to all African Americans born in the United States and, give Blacks the right to vote."

"Congressional records also show that most Democrats were opposed to passing the following laws that were introduced by Republicans to achieve civil rights for African Americans:


And during the 60's many Democrats fought hard to defeat the:

The Civil Rights Act of 1964, which supposedly established the Democrats bona fides on race, was passed in spite of the Democrats rather than because of them. Republican Senate Minority Leader Everett Dirksen pushed the bill through the Senate, despite the no-votes of 21 Democrats, including Al Gore Sr. and Robert Byrd. In contrast, only four Republicans opposed the bill, mostly like Barry Goldwater on libertarian principles, not segregationist ones."


"Congressional records show after signing the 1972 Equal Employment Opportunity Act and issuing Executive Order 11478, Richard Nixon, a Republican, then started what we know as Affirmative Action. After exclusively giving the Democrats their votes for the past 50 years, the average African American cannot point to one piece of civil rights legislation sponsored solely by the Democratic Party. Congressional records show that all previous legislation (since 1964) had strong bi-partisan support, even though some Democrats debated and voted against these laws."

The Clean Air Act and Clean Water Act was a result of founding The U.S. Environmental Protection Agency, proposed by President Richard Nixon and began operation on December 2, 1970. It had wide spread support from both parties.

The Nineteenth Amendment, giving the vote to women passed with overwhelming support from Republicans 56 to 25 in the Senate and 304 to 89 in the House.

The Modern Democrat party is not a true classic Liberal Party as the Republican Party once was. It is a socialist Party, born of 1960 radicals, taken over in the 70's by the far left thinking and has become a detriment to the Republic. Nor is the modern Conservative Republican Party like the backwards looking Democrat Party of the 19th and 20th century. The likes of Bull Conner, Robert Byrd, Al Gore Sr., Lester Maddox, Strom Thurman, Ernest Hollings, George Wallace, Hugo Black, etc. were all conservative Democrats. Mr. O'Donnell and members of the media painting the Republican Party with shameful ideas and actions of the their own party's past is ridiculous, and teaching an uninformed generation wrong history. The Modern Republican Conservative exist to preserve the American Experiment and values that make this country strong. Liberal thought and social justice of the 19th century has been seized and perverted by phony compassion bent on power and votes, and the Democrat socialist idea of big government dependency as a way of survival; but in reality is just perverting the American Dream.

As long as there are leftest lies, there shall be Conservative truth seekers there to dispute them. 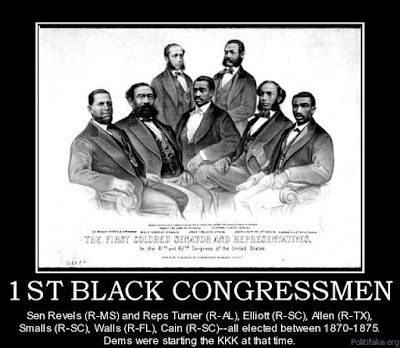 Thank You LARWYN for the Link