“Black people also wanted to go out in the woods and eat apples from the trees,  but black people were lynched on the trees. The tree became a big symbol.” Black people are triggered by trees and suffer Post Traumatic Slave Syndrome flashbacks."

The origin of the bizarre racist lynching theory of national parks appears to be Carolyn Finney. Finney was an actress noted for, apparently, little more than an appearance in The Nutt House. 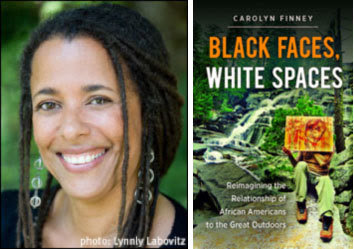 Then she became a cause célèbre for race activists when she was denied tenure by Berkeley’s Department of Environmental Science, Policy, and Management because her work didn’t meet academic standards. (i.e. she's to crazy even for U.C. Berkeley!) Her supporters blamed racism, rather than her academic shortcomings, and protested vocally.

These days she’s a diversity advisor to the U.S. National Parks Advisory Board. What wasn’t good enough for UC Berkeley is good enough for national parks and your tax money. She is also the author of Black Faces, White Spaces. In it she claims that “oppression and violence" against black people in forests and other green spaces.

Finney cites the work of Joy DeGruy Leary who invented a Post Traumatic Slave Syndrome that she claims black people suffer from. Affected by PTSS, black people experience “fear and mistrust of forests and other green spaces.” According to Finney, the tree is a racist symbol to black people.

Finney also claims that Theodore Roosevelt’s vision of preserving beautiful natural landscapes was rooted in “privilege”. Or as Fearn put it, “Preserving wild places is a white concept, going back to Rome.”

What shall we do about the racist trees? Finney is front and center at the new “inclusion” initiative. In addition to complaining about the racist trees, the inclusion initiative also claimed that national parks alienate Latinos because of the “color of the uniforms that rangers wear.”  According to the 'Hispanic Access Foundation', they look too much like the border patrol. Even though the uniforms are actually completely different. But much like the lack of lynchings at Yellowstone National Park, the truth doesn’t matter here. The accusations are absurd. And yet the payoffs keep coming. And there’s little doubt that this latest “inclusiveness” initiative will also pay off. Our parks will suffer. Our slimiest politicians will prosper.

This is what this is really about -The Obama era has rotted the Federal government with radical figures who are at war with fundamental American concepts and values. They intend to use their power to destroy those concepts and values. Aside from the usual diversity hiring push and buying from minority businesses in the “inclusiveness” proposals, not to mention nonsense about racist trees and scary uniforms, is a move to divert the focus to urban development.

It’s not about racist tree symbolism or uniform colors. It’s about creating positions for people like Carolyn Finney or Mickey Fearn so they can lecture us on how parks are privilege and nature is racist. It’s about finding yet another unlikely target for baseless claims of racism to be milked for money, grants, ads and contracts.Then there’s the flow of money to “community organizations” to engage “culturally diverse communities”. The Obama era has seen the “Sharptoning” of America as the same ugly shakedown scams that were being practiced in New York or Chicago are suddenly national policy. This is the Sharptoning of the National Park Service. It’s happening in every agency and arm of government. We just don’t notice it.

Read Much More About This story @ Sultan Kinish