The Supreme Field Marshall of the Tin Foil Hat Brigades, Alex Jones, a man who believes the government is putting chemicals in juice boxes to turn kids gay, has announced that he is now personally advising Donald Trump on some very important matters. Jones says that he personally talked to Trump about how he thinks this is going to be 'managed'.

“Homeland Security was going to go in and probably bring in U.N. observers to make sure illegals and people could vote, and change the debate away from election fraud, to retail voter fraud, which is individuals cheating rather than the computers being hacked. They’re so scared of him. I mean, they are having to put on adult diapers over this guy, okay?

That is a very sneaky thing of “them” to do. Who are “they” though? Lizard people? Colonel Sanders? Those Jesuit clones? Of course, Jones is gonna have to be more careful about advertising this, given that he already has concerns about Hillary Clinton putting more fluoride in the chemtrails and giving Trump Morgellon’s Disease and having Jones killed! Jones has had to load up on the firepower in recent days to protect himself from this definite possibility. Even his green screen is at risk! 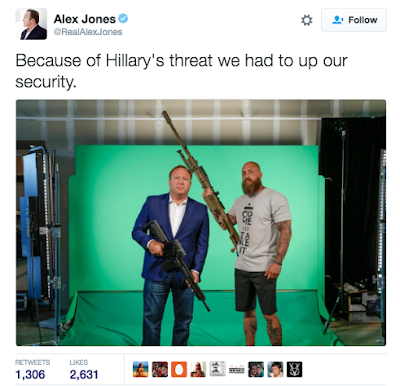 He is so very in fear for his life that he has pinned a video to the top of his Twitter timeline imploring the world to investigate Hillary Clinton if he dies. It is actually quite weird that Hillary Clinton and her Illuminati friends have not yet offed Alex Jones! Are they just super bad at Illuminati-ing? Watch yourself Alex!

Here is a Classic Alex Jones moment, broadcasting from the safety of his clothes closet just before the massive Al-Qaeda invasion of Austin Texas: