Photographers Will Be Salivating Over This Photo Opportunity.

You just know there are going to be some awkward and uncomfortable looks on someone's face on January 20th.  And every photographer within a quarter of a mile will have a lens trained on Hillary Clinton as the Oath of Office is administered to Donald Trump.

CNN has reported former President Bill Clinton and Democratic presidential nominee Hillary Clinton have decided to attend President-elect Donald Trump's inauguration. To me, it's good to finally see a democrat these days have a moment of lucidity and decide to act like an adult for a change. That, or Bill talked Hillary into attending hoping she strokes out or goes stark raving mad afterwards and he can finally be rid of the shrieking witch.

My fear was that something crazy would happen on the 20th, like Hillary taking a peaceful walk alone in the woods of Chappaqua during the inauguration ceremony and be mauled by a wild bunch of angry woodchucks or something and dominate the news cycle for the next two days. But now, my fears have been laid to rest. That is, if Hillary doesn't come unglued and stands on her chair, tearing at her clothes and yelling "the Russians rigged the Election!" Remember who we're dealing with here. 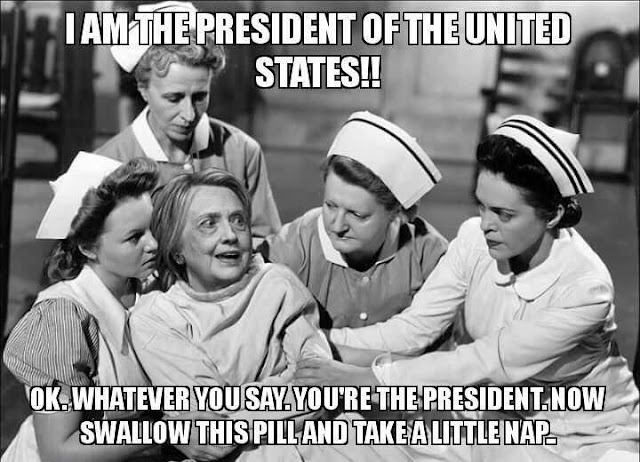 Meanwhile, former President George W. Bush's office stated he and former first lady Laura Bush will also attend "and  are pleased to be able to witness the peaceful transfer of power", the last according some of our friends on the left.   Previously, Jimmy Earl Carter was the only former commander in chief who had publicly said he would attend Trump's inauguration. With Jimmy's dictator pals Hugo and Fidel dead now, he really hasn't anything to do anyway.