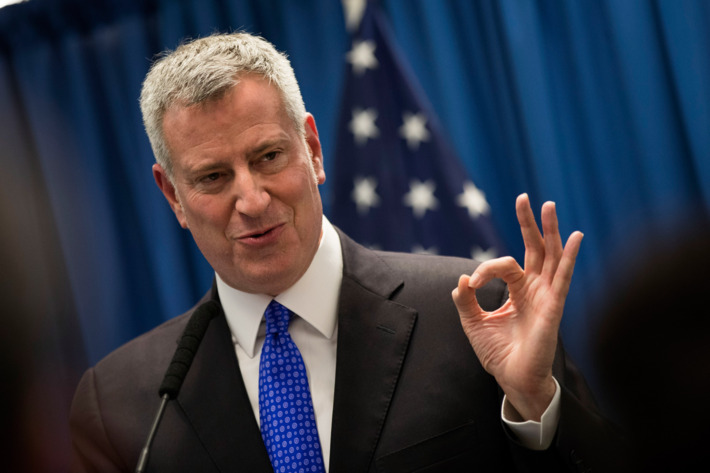 New York City Mayor Bill de Blasio  has an $800,000 program in place that uses taxpayer money to pay criminal suspects and court defendants with gift cards in exchange for taking a survey about the friendliness and comfort of Manhattan’s courtrooms and NYC criminal Justice system, the New York Post reported.

The survey asks participants to rate the courteousness of judges and prosecutors — and even courtroom temperature. Those who complete the 144-question survey get a $15 Dunkin’ Donuts gift card. The program is from the Mayor’s Office of Criminal Justice. The revelation comes on the heels of an October report that inmates at Riker’s Island prison were given pizza parties in exchange for not fighting.

So how New Yorkers feel about the program?

* (must be read with New York accent) “Once again, the mayor wants to appease the criminals at taxpayers’ expense,” a source in the city’s police department told the Post. “Next thing they’ll be giving out Macy’s cards so these perps could do their holiday shopping.”  The Post also quoted a “high-ranking NYPD source” who said de Blasio’s gift-card reward “crazy,” adding that appearing in court “isn’t supposed to be fun. You want these people not to want this to happen again."

Michael Palladino, president of the NYPD detectives union, told the Post that defendants getting gift cards is like “a nice Christmas present for our participants in the criminal-justice system. It’s not supposed to be a positive experience to get locked up or get a summons.”  Ed Mullins, president of the sergeants union, recalled to the paper the “long-standing statement that crime doesn’t pay. We’ve now proved it does. It now pays for a $15 Dunkin’ Donuts card. Maybe we can give them confiscated firearms, too. Where is this coming from?  We’re all singing Kumbaya together?"

Dennis Quirk, president of the Court Officers Association told the paper he’s insulted by the idea that defendants are essentially grading court officials on their job performance. "Maybe it’s time we process criminals over tea and biscuits. Next, City Hall is going to want us to hand out ice cream cones and candy bars."

But court defendant Juan Cruz, who the Post said was up against a “bullcrap misdemeanor charge,” seemed pleased with his reward: “I told them I’ve been here too many times to not understand the process. But hey, got me a doughnut and cup of coffee when I get out of here.”

And how did the Mayor’s Office of Criminal Justice respond? The gift cards are “compensation” for the participants’ time in completing the survey, and the cost was a “minuscule” part of the overall budget, one official told the paper.

When $800,000 is considered "minuscule", that my friend should tell you just what civil servants think of you as a taxpayer and the worth of our sweat they extort daily.