Have We Not Learned Anything From What We Watch Happening To Europe? 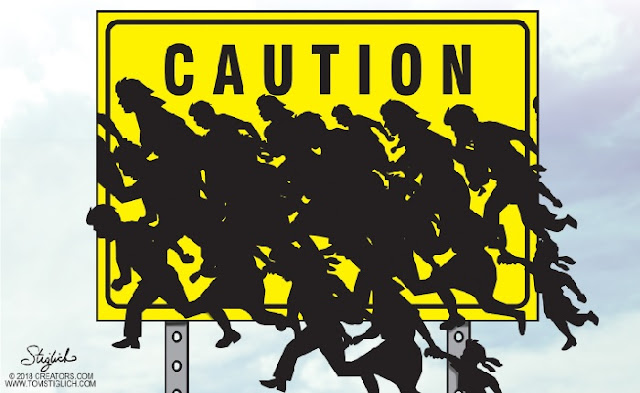 This is not a caravan of Doctors, Scientist and Engineers bringing cultural enrichment, this is the beginnings of a third-world invasion we cannot absorb.

The United States shall guarantee to every State in this Union a Republican Form of Government, and shall protect each of them against invasion; and on Application of the Legislature, or of the Executive (when the Legislature cannot be convened) against domestic violence.

Yesterday there was much debate and some consternation about the prospect of sending our military down to the border to prevent the invaders (and that is exactly what they are) from entering US soil. Yes, the "optics" would be shall we say "suboptimal" if even one of the individuals were to be injured or worse in any encounter with American troops. But I think the consequences would be far worse both in political terms as well as actual national security if President Trump does not take decisive action immediately to at minimum prevent this mass of invaders from crossing our borders if not send them back where they came from.

The President ran and won on this very issue. From a political standpoint, what Soros and the Dems hope will turn into an October surprise to defeat the GOP has the potential to bury them not only in 2 weeks but in 2020 and perhaps beyond. Aside from sending the military and physically sealing our border, after declaring a national state of emergency the President should also:


As to #6 on that list, since it is more than likely that Soros is involved in this via his various front groups, he is de facto acting in a manner that is seditious if not treasonous. As Samuel Johnson said, "when a man knows he is to be hanged in a fortnight, it concentrates his mind wonderfully." The question is who is the hangman and who is the condemned? The world wonders...