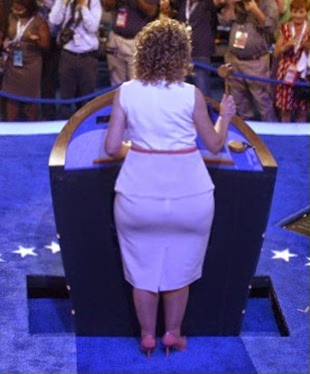 Inside the Obama / Hillary DNC  Lovefest and Circle Jerk it has at least finally dawned on someone what a terrible liar and monumental embarrassment she has been. But really no surprise to me she was picked up on wavers by the nest of corruption and liars that is the Clinton campaign. And let's face it, Lil' Debbie didn't get the boot from the DNC because she's corrupt. She got booted because she got caught.  But, I for one am thankful for the wealth of material such as she gave us these past few years!

Secret military operations to divert LAX planes for a week...

LOS ANGELES (KABC) --Mysterious maneuvers over the Pacific are forcing a change in Los Angeles International Airport landings late at night, meaning noise for thousands of people in the flight path.

Commercial flights approach from the west and over the ocean to keep noise levels down, but due to secret military operations the airspace over the Pacific is closed to incoming flights for the next week. The military is not saying what exactly is causing the change, and LAX claims it's also in the dark. All they know is planes can't be flying at low altitudes to our west.

Six years ago, ABC7 cameras captured a military operation in downtown LA. Helicopters were seen swooping between high-rises, close enough that residents were able to see armed soldiers in camouflage outside their window.  Authorities claimed it was part of a training exercise designed to ensure the military's ability to operate in urban environments and to prepare forces for upcoming overseas deployment.

What's going on this week is a mystery.

Well, I think Donald Douglas @ American Power may have solved the mystery - but I doubt  it will be satisfactory enough for the "Legions of The Tin Foil Hat".