If You Don't Believe Our Culture Has Gone Off The Rails, Well Just Read This: 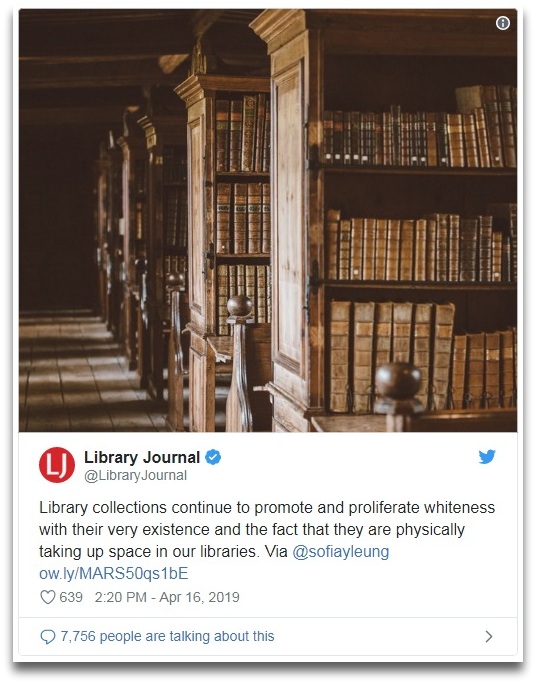 Don’t Oppress My People With Your Public Libraries

The Tweeter feed of the prestigious Library Journal, a "global community of more than 200,000 librarians and educators," proudly directs its readers to the mental exertions of one of it's own, Ms. Sofia Leung and her screed entitled "Whiteness As Collections"

"Our library collections, because they are written mostly by straight white men, are a physical manifestation of white men ideas taking up all the space in our library stacks. Pause here and think about this."

Ms Leung, an academic librarian, is unhappy that public libraries in the US, a white-majority culture with a white-majority history, tend to have among other things lots of books by authors with pale skin, white dudes thinking great thoughts, or as we used to call it, Western Civilization. This, we’re told, is an “interesting mini-eureka moment” that our Queen of Intersectional Rumination feels compelled to share.

Ms. Leung airs her distaste for "white men ideas", as if they had been uniform across continents and throughout history, while reminiscing about attending a "white AF conference" two years earlier. I was unsure what the “AF” might refer to and searched for some literary or scholarly explanation. It then occurred to me that a "white AF conference" is, to borrow the woke vernacular, a white as fuck conference. Which is how not-at-all-racist academic librarians convey their thoughts, apparently.


"If you look at any United States library’s collection, especially those in higher education institutions, most of the collections (books, journals, archival papers, other media, etc.) are written by white dudes writing about white ideas, white things, or ideas, people, and things they stole from POC and then claimed as white property…

When most of our collections filled with this so-called "knowledge," it continues to validate only white voices and perspectives and erases the voices of people of colour."

At which point, things get a little breathless and intermittently grammatical. However, readers may wish to ponder how synthesising insights from around the world, and from cultures long gone, and preserving those insights in libraries is somehow a bad thing. Readers may also wish to ponder the implications of a librarian and self-styled educator, schooled at the University of Washington and Barnard College New York, and who is offended by the existence of “white ideas” and the “so-called : knowledge of "white dudes."

As if sensing that her thoughts aren’t sufficiently lurid and unhinged, Ms. Leung then shifts into higher gear;


"Library collections continue to promote and proliferate whiteness with their very existence and the fact that they are physically taking up space in our libraries. They are paid for using money that was usually ill-gotten and at the cost of black and brown lives via the prison industrial complex, the spoils of war, etc...."

Amid this avalanche of conspiracy theories and rote indignation, we’re told that the prevalence of books by pale-skinned authors in a majority-white country "indicates that we… don’t think people of colour are… as important as white people."  The exact line of reasoning here is somewhat unclear and obscured by the inevitable in-group incantations, including "sites of whiteness", a term deployed to describe public libraries, and which we’re to believe somehow crush the very breath out of the heroically brown.

Ms. Leung reminds me of another classless ethnic elitist we all know who once spoke in a similar vein.