A Dog's Thoughts on Pink Floyd

Not long ago I was introduced to a meditation channel. It is not the sort of thing I would seek out on my own, but I actually sat and listened to it for a few minutes. Within a very short time it had formed a reminiscence of a Pink Floyd song from their famed LP Ummagumma, 'Grantchester Meadows'. I then forced myself to sit and listen to some more of this channel. I came to a conclusion. Someone identified the need to create one of these channels (actually there are several) and there are people checking in. This can not be a bad thing if it leads to more people finding their chill and not being such colossal dicks all the time.

Or...they could just listen to Pink Floyd! There are certain standout pieces from the band's portfolio which appear with regularity in my various playlists. As I was caused to make a review of these I made a discovery that rather surprised me. There were no tracks from the 'Animals' LP on any of the lists. Naturally my reaction was to cue it up and give it a listen.

The change of season has brought with it no shortage of grey, miserably damp, chill days upon which to spend contemplating these weighty matters. I happened to have at hand an intriguing new strain from my botanist, the 'Montana Flowering Dogweed', which I employed to good use for the occasion. Both were consumed in the dark, save for the light of the fire. Pink Floyd has always served as a fine soundtrack for any blaze.


For those who are unfamiliar, and those who may have simply forgotten, Pigs (three different ones) was on side two of the original vinyl. The lead off of the LP is the plaintive Pigs on the Wing, followed then by the stark and brooding piece Dogs. Beginning at the 6:14 mark of side one there is a segment of about 45 seconds where there are the barks and howls of various hounds.

Where I sat enjoying this my dog, Matthau, was at my feet and I noted his ears prick up slightly at this point. In the idle chatter one often engages with their pets I asked " Well, old boy! Know what they're saying, do you?" He gave me one of those looks, as dogs sometimes do, which seemed to question my sanity. He raised his massive head to snuff once at the smoke billowing from the glass bong and then rose from the floor to pad across the room and take a seat in the chair opposite me. I wasn't expecting an answer and his behavior, though somewhat odd, was not entirely out of the ordinary.


"Matthau? I didn't know you could talk!"

"Of course I can speak, you pillock! I'm an English Mastiff, not some Neapolitan dullard!"

"No offense, Matthau! I just wonder why you waited until now!"

"It's the Dogweed, old bean. Otherwise you're too thick to hear it."

"You have a better explanation?"

" I suppose you're right, boy. We'll have to ask Carlton to get us some more of this soon. So what are those dogs saying anyway?"

"Oh they're banging on about what worthless sods their agents were. Couldn't even negotiate a reasonable royalties contract, could they?"

"Really? You're putting me on!"

"Am I? Perhaps you'd like corroboration from another hound?"

His point was well taken and I surely had no reason to doubt him. After repeated attempts at contact, Roger Waters has declined any comment upon the matter.

* Burghal Hidage is Middle Finger News Media and Music Critic (no one really knows why) and a very strange dude. He holds a degree in Medieval Renaissance Tapestry Weaving from Woodshire College U.K. and an expert on the theory of barometric pressure.
© Posted By Diogenes Sarcastica™ on 12/19/2018 04:00:00 AM No comments:

The Slow Ugly Self Demise Of The Leftist Media Machine 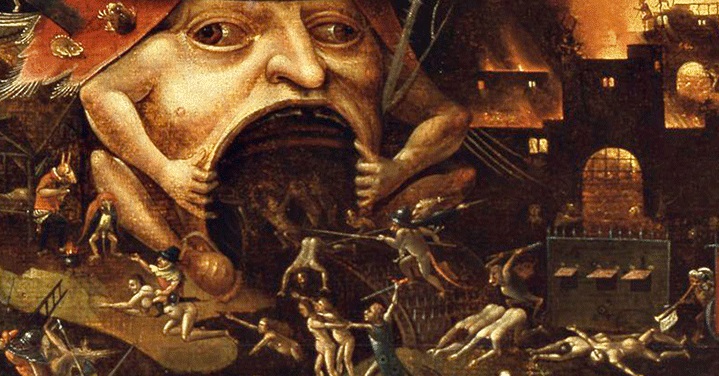 Underneath it all she had always been a petulant little witch. The type who at the age of twelve and a half was permitted to join the adult table, yet could not simply content herself with the honor. She doesn’t even bother with the makeup any more. She’s been exposed to all, to the most intimate detail. She still carries the same skin, even if all of the dough beneath has settled to form unsightly bags and cellulite deposits. In her own mind she’s still all that. Where this is present in some it inspires a certain admiration for such security in one’s self.

In Gazette’s case it can but inspire pity, for we see not a woman liberated of her inhibitions; instead, a woman drunken on her former glories. She longs to once again feel that intoxication experienced in her heroic age, the days of The Pentagon Papers and Watergate, not realizing that this dragon will ever elude her grasp.

She is one of them now, the predictable fruit of every other revolution. We needn’t feel embarrassment for her, our pity is to be reserved for those more worthy of such tender mercies. Gazette now seeks neither sympathy nor solace. She has grown petty and thin-skinned, her only purpose now is vengeance. Throughout her sordid history she has (for convenience, amusement or both) made her bed with some equally unscrupulous characters. In her glory years these were singular encounters, a darkened rendezvous with a Deep Throat. As her star faded she had morphed into just another useful tool, until she graduated to a full on gang bang with the Deep State.

Gazette’s real kink has always been about being on the inside, recipient and disseminator of rumor, gossip and palace intrigue. Being invited to and becoming the life of all the best DC circuit cocktail parties. In her day she was the Grand Mistress to all, the whore incarnate within her home circles; while posing the Madonna face to the contemptible masses, cooing her gentle, motherly scold to the unwashed curs for their ignorant transgressions against the public virtue of the day. Her manipulations were masterful, her physical dexterity superhuman: contorting to any position required that might offer an orifice to all comers. And this was how she was to be repaid? No, no, no….not her. This will not stand.

Make no mistake, my friends. This lady still has more tricks in her. One does not rocket through her orbits and not come into the possession of certain, shall we say “leverage points”. In days of old these might still hold some currency. Had she kept her circle of friends to a more exclusive membership she might still be able to survive with this play. Not so in today’s world. She has left herself too widely exposed. The parties inside of her bubble may not hear much of anything that comes from outside of it, but they certainly do one hell of a lot of talking within it. Gazette always wanted to have her cake and eat it too. She wanted to enjoy the privileges of being on the inside without having to assume any of the risks. She realizes now, too late, that with her sources compromised she is no longer any value and, by extension, no threat. She is equally compromised, fully implicated and in short: reduced to an accomplice.