John Kerry’s history on foreign policy throughout the years has been nothing short of a disaster.  Kerry ended his foreign policy career as Obama's Useful Idiot with a preposterous, rambling, lengthy speech poking a finger in the eye of Israel.


Let’s skip the formalities and stipulate that the Obama administration hates Benjamin Netanyahu. Most muslim sympathizers do.  That’s why Obama sent his campaign team to Israel to defeat PM Netanyahu.  And with that in mind, it didn’t take long for PM Netanyahu’s office to respond to Kerry’s speech, saying “For more than an hour, Kerry obsessed over the issue of settlements and hardly touched on the root of the conflict – Palestinian resistance to a Jewish state within any borders.”

Kerry’s inability or unwillingness to admit that the Palestinians have never negotiated in good faith with Israelis is the heart of the problem. It’s why Kerry’s diplomacy is such a failure. Later, PM Netanyahu added "Israelis do not need to be lectured about the importance of peace by foreign leaders."

Saying that relations between this administration and Israel are chilly is understatement. Saying that Secretary Kerry is more incompetent than Mrs. Clinton is mind-boggling.


"Before June 4, 1967, Jews were forbidden from praying at the Western Wall, Judaism’s holiest site. They were forbidden to attend classes at the Hebrew University at Mt. Scopus, which had been opened in 1925 and was supported by Albert Einstein. Jews could not seek medical care at the Hadassah Hospital on Mt. Scopus, which had treated Jews and Arabs alike since 1918. Jews could not live in the Jewish Quarter of Jerusalem, where their forbearers had built homes and synagogues for thousands of years. These Judenrein prohibitions were enacted by Jordan, which had captured by military force these Jewish areas during Israel’s War of Independence, in 1948, and had illegally occupied the entire West Bank, which the United Nations had set aside for an Arab state. When the Jordanian government occupied these historic Jewish sites, they destroyed all the remnants of Judaism, including synagogues, schools, and cemeteries, whose headstones they used for urinals. Between 1948 and 1967 the UN did not offer a single resolution condemning this Jordanian occupation and cultural devastation."

The Obama administration knew that this resolution would tip the international scales into the Palestinians’ favor. Here’s Dershowitz’s explanation of that:


"But that has now changed with the adoption of the Security Council Resolution. The UN has now determined that, subject to any further negotiations and agreements, the Jewish areas of Jerusalem recaptured from Jordan in 1967 are not part of Israel. Instead, according to the resolution, they are territories being illegally occupied by Israel, and any building in these areas — including places for prayer at the Western Wall, access roads to Mt. Scopus, and synagogues in the historic Jewish Quarter — “constitutes a flagrant violation under international law.” If that indeed is the status quo, absent “changes . . . agreed by the parties through negotiations,” then what incentives do the Palestinians have to enter negotiations?"

Barack Obama and his administration's hostility towards Israel has never been more openly displayed than during this past week. Without question, he’s been the most hostile, anti-Israel president in US history.  And John Kerry was his Toad.
© Posted By Diogenes Sarcastica™ on 12/28/2016 11:00:00 PM
Labels: Foreign Affairs, Middle East, The Turd King

The Associated Press has lifted a video from a social media account affiliated with the Islamic State that purports to show the destruction of ancient artifacts in Iraq's northern city of Mosul.  The destruction is part of a campaign by the ISIS Islamic Jihadist  in order to eliminate what they view as heresy.

"The five-minute video shows a group of bearded men inside the Mosul Museum using hammers and drills to destroy several large statues, which are then shown chipped and in pieces. The video shows a black-clad man at a nearby archaeological site inside Mosul, drilling through and destroying a winged-bull Assyrian protective deity that dates back to the 7th century B.C.

In New York, U.N. spokesman Stephane Dujarric said the U.N.'s cultural agency, UNESCO, is examining the video. "The destruction of cultural heritage is reprehensible and criminal," Dujarric said, adding that it robs current and future generations of the history of their past.

Among the most important sites under the militants' control are four ancient cities — Ninevah, Kalhu, Dur Sharrukin and Ashur — which were at different times the capital of the mighty Assyrian Empire.

The Assyrians first arose around 2500 B.C. and at one point ruled over a realm stretching from the Mediterranean coast to what is present-day Iran. Also in danger is the UNESCO World Heritage Site Hatra, which is thought to have been built in the 3rd or 2nd century B.C. by the Seleucid Empire. It flourished during the 1st and 2nd centuries as a religious and trading center.

Mosul, Iraq's second-largest city and the surrounding Nineveh province fell to the militants during their blitz last June after Iraqi security forces melted away. The region under IS control in Iraq has nearly 1,800 of Iraq's 12,000 registered archaeological sites and the militants appear to be out to cleanse it of any non-Islamic ideas, including library books, archaeological relics, and even Islamic sites considered idolatrous."

"Oh Muslims, these artifacts that are behind me were idols and gods worshipped by people who lived centuries ago instead of Allah."

"The so-called Assyrians and Akkadians and others looked to gods for war, agriculture and rain to whom they offered sacrifices. Our prophet ordered us to remove all these statues as his followers did when they conquered nations."

The damage to Iraqi artifacts in Mosul is the latest episode in incidents that have targeted the nation's heritage.

In January, Islamic State militants ransacked the Central Library of Mosul, smashing the locks and taking around 2,000 books — leaving only Islamic texts. Days later, militants broke into University of Mosul's library. They made a bonfire out of hundreds of books on science and culture, destroying them in front of students."

There was no word whether the militants also destroyed the the un-islamic western tennis shoes they wore during the destruction..... 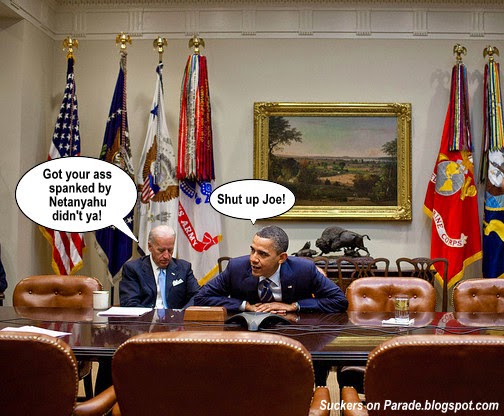 
"President Obama and Israeli Prime Minister Benjamin Netanyahu spoke by phone on Sunday as a ceasefire with Hamas broke apart. Negotiations to extend a 12-hour truce broke down over the weekend. Israel says it offered to extend the ceasefire for another 24 hours, only to see new rocket fire from Gaza. Israel then resumed its own military actions in Gaza.